The traditional academic publishing process is widely recognised as time-consuming for authors and reviewers and, in many cases, is slow to disseminate new knowledge. Over the past few years, the sharing of preprints, or versions of research outputs, ahead (or even instead) of formal publication has become more widespread in a number of academic disciplines. This study aims to advance Knowledge Exchange’s (KE) previous work in the area of preprints, which consists of a 2018 review on this evolving landscape (knowledge-exchange.info/event/preprints).

The overall objective of this study was to explore the place of preprints in the research lifecycle from the points of view of researchers, research performing organisations, research funding organisations and preprint servers/ service providers. Our investigation covered:

This study was based on a comprehensive literature review and a set of 38 interviews that were transcribed and qualitatively coded for the purposes of thematic analysis. We mainly focused on research areas where preprint posting is growing (e.g. biology, chemistry and psychology, which were the focus of our interviews) but also considered disciplines where preprint posting is common (e.g. physics, mathematics, computer science, economics) or relatively less widespread (e.g. humanities).

The second wave of preprint servers

Explosive growth has characterised the preprints landscape over the last few years. The first wave of preprint servers started with the high energy physics and economics communities in the 1990s, but, since 2010, the movement has been growing in popularity in other disciplines. Increasingly available and standardised technical solutions have enabled the launch of a range of disciplinary preprint servers focusing on the broad and early dissemination of research.

Preprints can support open scholarship by enabling free online access and potentially increasing the pace of research. They have a potentially transformative role in the scholarly communication landscape. Nevertheless, there remains significant uncertainty as to whether recent growth in interest in and take up of preprints services will be sustained, and how broadly preprints will be adopted across disciplinary communities.

We found that ambiguity on the definition of a preprint is present across all disciplines and stakeholder groups: this means that any discussion of preprints is inherently complex and must be sensitive to context. The most common interpretations are that a preprint is either:

However, a number of other views arose in this study. For example, the idea that preprints might be research outputs that are not intended as papers for peer review or that might not make it to the published stage (e.g. null results) was advanced.

Early and fast dissemination is a key motive for preprints posting

Early and fast dissemination appears to be the main motive behind preprint posting. In addition, increased opportunities for feedback seem to be highly valued, even though comments are not often added directly on preprint servers. Advantages for early career researchers are also often mentioned, as preprints can be added to CVs to increase the chances of being hired or promoted.

Interviewees reported that their main concern when it comes to reading and reusing preprints is the fact that they haven’t been peer-reviewed. This means that, potentially, incorrect findings could be shared broadly or reported on by the media. However, there is also an expectation that researchers and journalists will behave ethically and professionally, which should minimise the risk of the above.

Rejection by academic journals is another barrier to uptake, as some researchers fear that depositing a preprint might lead to editors not accepting their submissions on the grounds of the ‘Ingelfinger rule’. This, however, appears to be only a perceived barrier, as many publishers now explicitly accept preprint posting.

A wide range of preprint servers are available today

In the course of this project, we identified over 60 platforms that can be used to store, share and, in some cases, comment on preprints. Today, the availability of a server that is fit for the purpose of any given researcher is almost guaranteed. It should be noted that preprint servers are often started from the bottom up and maintained by disciplinary communities, which indicates that they are likely to address any technical requirements or customs existing in a research field.

Researchers and preprint servers often rely on Twitter for preprint discovery and sharing purposes. Researchers can follow Twitter bots posting preprints as set up by individual preprint servers but also share their own preprints. Twitter is, in practice, how many researchers appear to encounter preprints for the first time and is one of the key pathways for making and receiving comments.

The preprints landscape is currently characterised by some degree of fragmentation, which suggests that future developments are likely to benefit from closer collaboration between the stakeholder groups involved. These include researchers, research performing organisations, research funders, service providers and publishers. We note that, at present, there is significant experimentation in terms of approaches and technologies, and that the extent to which stakeholders are collaborating is unclear in some cases.

Different practical approaches to preprint servers are being taken

A range of technical solutions are available to implement preprint servers in practice, including the popular Open Science Framework and digital repository solutions (e.g. EPrints, figshare, DSpace, Invenio, Drupal); ad-hoc and proprietary infrastructure is also widespread. The choice of solution has little impact on the openness of preprints deposited but does affect user experience, the level of control that the owners and managers of preprint servers can exert over their platforms, and the effort required to do so.

Current technologies seem largely suitable to support the uptake of preprints. For instance, digital object identifiers or permalinks can be assigned to preprints, withdrawals are possible on preprint servers and open licensing options are offered. However, versioning features are not used by many authors and the automatic tracking of a manuscript through the publication process is difficult. In most cases, preprint posting is disconnected from traditional publication workflows: this means that researchers would typically post a preprint independently ahead of publication and then add new versions after making revisions.

In some cases, preprints are posted as the author’s accepted manuscript on both a preprint server and an online repository (e.g. an institutional repository). We call this phenomenon ‘information overlap’ and raise the challenge of covering the costs of technical infrastructure in cases where this duplicates efforts that are already otherwise funded. Currently, there is a lack of consistency in terms of approaches to the long-term preservation of preprints, and this is not seen as a priority due to limited budgets and the quick pace of change within the preprints landscape. However, long-term preservation is recognised as a growing concern that should be addressed in the future, including in terms of what preprints should or should not be within the scope of digital preservation activities.

Are preprints riding the hype wave?

Preprints and preprint servers have been growing in popularity very quickly over the past few years. Based on a hype cycle interpretation, the visibility of preprints can be expected to decrease from the current “peak of inflated expectations”, and we note that some players in this landscape might merge or disappear in time. After a “trough of disillusionment”, preprints and preprint servers might once again grow in visibility and reach the level of mainstream adoption that is currently seen in the communities served by arXiv and RePEc (physics, mathematics, computer science, economics, among others).

The future of preprints

We investigated the question of whether preprint posting will evolve as a researcher- or publisher-centric phenomenon. The answer is not clear at present, but we note that researchers are mostly responsible for posting preprints today. A shift to a publisher-centric model could potentially improve the tracking of preprints throughout and after publication, but there are growing concerns of market consolidation in the scholarly communication landscape. Clearly, the choice between a researcher- or publisher-centric approach will affect funding, too: in the former case, grants or pooled funds would likely form the bulk of funding for preprint servers, while in the latter these could be supported by publishers, provided they perceive sufficient potential for a return on the investment required.

Do traditional journals need to evolve?

In a shifting landscape that could be transformed by the increased use of preprints, the role of and costs attached to traditional academic journals is liable to be questioned. Furthermore, overlay journals reviewing and sharing content posted to preprint servers are already being used in some disciplinary communities, and this could also affect the extent to which traditional journals might have to reframe their value proposition.

Licensing options should be carefully considered

Licensing is recognised as a challenge when it comes to preprints, as the promise of broader reuse of research outputs is underpinned by permissive licence terms. Several study participants were not able to fully justify their choice of licence for their own preprints, which suggests that this should be a key area of focus

A growing number of research funders are starting to acknowledge and accept preprints as suitable for inclusion in grant applications, and we recognise the role that preprints can have in researcher evaluation. There is an increasing push to focus on individual outputs rather than on publication venues such as high-impact journals.

Preprint servers today are being started by enthusiastic proponents of open scholarship but may not always meet a perceived need in their research communities. The increasing focus on open scholarship in the research landscape is certainly contributing to some extent of behavioural change, but preprint servers might have to focus more on addressing researchers’ pain points if they are to lead to lasting change.

We see three possible scenarios for the future of preprints:

Scenario 1 is expected to materialise if current efforts to promote preprints fail. Scenario 2 is likely to be the case in the short-to-medium term, but it might be a transition between the other two scenarios, or alternatively, an endpoint if further developments fail to materialise. Scenario 3 can only happen if all stakeholders involved cooperate to turn the promise of preprints into reality and is likely to be an option only in the long term. Even then, it may be that certain disciplinary areas, such as the Humanities, do not adopt preprints at any scale.

This study led to the identification of five areas that require further investigation:

We note that active engagement is needed to build a sustainable future for this growing scholarly communication practice: the higher the level of stakeholder coordination, the more positive any outcomes will be for the research community. 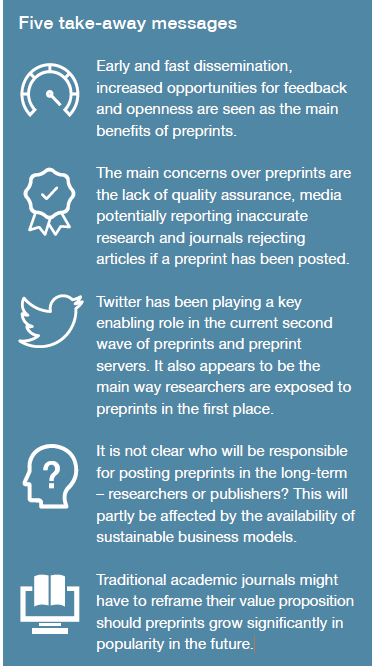