About the proposal for software indicators in Open Science Monitor

2.3. 4) GitHub as the only reference for counting software projects

This report follows the request for contributions concerning the indicators proposed in the document Preliminary Open Science Monitor (OSM).

1. Summary of the proposed indicators

The indicators proposed by the OSM for software are the following:

2. Analysis of the proposal

In terms of terminology, it should first be noted that “open code “is an unknown neologism in the world of software. It has no precise definition, it is not used by software developers, nor by the lawyers and experts in the domain. Thus, the term “open code” could be interpreted as relating to a code which can simply be browsed on the Internet, without any guarantee that it comes with additional rights of modification and redistribution of changes that characterize open source and free software licenses.

It is obvious that, in the absence of a precise definition of what one wants to measure, it will not be possible to have effective measures reliable or to recommend explicit policies in this field. We therefore strongly discourage the use of this neologism, that is undefined and subject to misinterpretation.

We recommend using the terms “free software” or “open source software”, which are well defined and have been used for decades. The definition of these terms is maintained by specialized NGOs (OSI, Open Source Initiative, and FSF, Free Software Foundation). They correspond to a real use in the world of software development and IP law. Some institutions of the European Union promote the aggregative term of “FLOSS”, for Free / Libre and open-source software (see https://cordis.europa.eu/publication/rcn/9015_en.html), that can also be used.

In the framework of Open Science, the term “Open Source Scientific Software” could therefore be used.

Consequently, proposition 3) is, of course, to be reviewed.

DOIs are totally unknown identifiers in the world of software. Using them as indicators would not only be inoperative, but also very dangerous, for the following reasons:

2.3. 4) GitHub as the only reference for counting software projects

This proposal is to be rejected absolutely, for the following reasons:

There are several alternatives available to build way better indicators for the scientific software that is made available under an open source license. Some are immediately actionable, others are more in the medium term.

OpenAire is a 10+ year European union-funded infrastructure that aggregates all the open access publications available in the many open access portals across Europe, and beyond. In collaboration with Software Heritage, OpenAire is building a catalogue of software projects mentioned in the scientific articles indexed in its database, which provides a concrete first step to build a transparent, independently verifiable indicator.

Considering that OpenAire is an EU-funded infrastructure, it would be difficult not to leverage it for building the software indicators for the OSM.

Identifying open source research software is a preliminary step to building a software indicator for the OSM. Ensuring that the identified software is properly available to other researchers requires an extra essential step: archiving it.

Software Heritage (www.softwareheritage.org) is building the universal archive of software source code, and has already been identified as an essential infrastructure in the French National Plan for Open Science.

It is essential that the OSM counts the amount of open source research software that is safely archived in Software Heritage.

Software Heritages provides also a high quality harvesting process of many software repositories. It is can be seen as a better starting point than GitHub.

There are tens of thousands of important scientific software that has been available under an open source license for years and even decades. Many scientific communities have built manually curated catalogues whose quality is way superior to any automated index one can imagine today. Building an aggregate index for these catalogues is the way to go if we want to create a meaningful indicator in the medium to long term.

The analysis provided in this report shows that the set of indicators proposed under the OSM for the software activity of the researchers is very far from satisfactory, and cannot even be considered as a baseline, because of the methodological and economic bias they entail.

Furthermore, we strongly remark that scientific software is a small part of a much bigger ecosystem of software development that involves industries and developer communities well outside the research sector. Hence, any proposal made concerning research software must take into account the practice and standards of the developer community at large.

Hence, we strongly advises the creation of a working group involving a representative panel, including researchers having a long experience in software and hardware development, actors of the transfer of software and research materials to industry, representatives of open source developer communities, legal experts from the world of software and free hardware, and scientists with the necessary skills to assess the feasibility of constructing the proposed indicators. 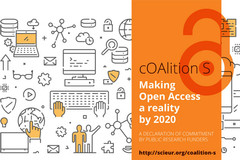 News from the Committee
06/09/2018
Open science: adoption in 11 European countries and for ERC programmes of obligatory open access for publications
On Tuesday September 4th 2018, 11 National research funding organizations announced the launch of cOAlition S, with the support of the European Commission including the European Research Council (ERC). cOAlition S is an initiative that aims to substantiate free access…
Agenda
Agenda
Upcoming events
Resources
Resources
The founding texts and resources