Read the report on HAL

View the poster with the main results

BUILDING THE DATASET OF JOURNAL ARTICLES
A journal article dataset has been developed with metadata of articles by France-based authors in the period 2013-2020. The purpose of this dataset was to form a basis for the retrospective and prospective analyses of the total costs of APCs paid by French institutions. APCs are the article processing charges (APCs) that researchers must pay to have their articles published in some open access journals.

The dataset has been built as follows:

RETROSPECTIVE ANALISYS OF APC COSTS FOR OPEN ACCESS ARTICLES BY FRANCE-BASED CORRESPONDING AUTHORS
The main results of the retrospective analysis of the above-described dataset regarding the numbers of APC-paid articles with a France-based corresponding author:

The main observation regarding the price evolution of the APCs is that the APC-level for HybridOA articles started in 2013 at a high level (2 453 € in average) but have been stable over the years with 2 488 € in average in 2020. The APC-level for articles in Gold journals started considerably lower with an average APC in 2013 of 1 395 €. However, a rapid increase in the level of APCs for Gold OA articles has been observed, with an average APC of 1 745 € in 2020.

This has led to a calculation of the total cost of APCs paid by French institutions between 2013 and 2020 (see figure below). 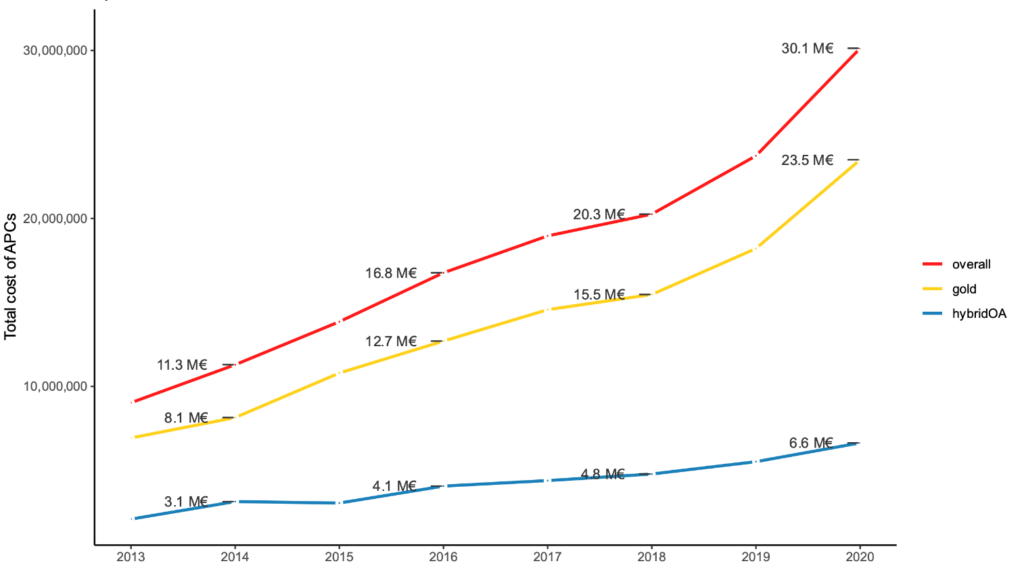 ANALYSIS OF THE SUBSCRIPTION COSTS FOR JOURNAL PACKAGES
In addition to the above-mentioned article dataset, 2019 and 2020 data from the ERE survey by Couperin (the national consortium of research performing organizations that negotiates with publishers the prices and conditions of access to research publications for the benefit of its members) were analysed in order to assess the total subscription costs of journal packages for French institutions. This data was compiled in Microsoft Power BI with additional information about the categories of the products, the publisher tiers, and the respondents to both surveys. This resulted in an estimate of ca. 87,5 M€ for the total expenditure on journal packages by all Couperin members in 2020. An analysis by Couperin of the ERE surveys 2014-2021 showed that the price increases per year in this period varied between -1,95% and +7,22% with an average price increase of 1,76% per year.

The evolution of the total journal subscription costs based on this average annual growth rate results in an estimated 97,5 M€ in 2030.

PROSPECTIVE ANALYSIS OF APC COSTS
Using known and trusted data from our dataset (i.e. excluding articles for which the country of the corresponding author could not be determined, or whose APC price could not be precisely estimated), we developed mixed-effects models of APC prices as a function of other articles’ features.

These models were used to predict the evolution of the total cost of APCs for the period 2021-2030, in various situations, represented on the graph below:

Finally, a situation was simulated where 90% of all articles by France-based corresponding authors would be Gold OA (and 10% would be published in Diamond OA journals) in order to assess the cost ceiling of such a 100% open access situation (yellow line).

Summary of predicted cost of APCs in various situations (2021-2030)

I. Building the article-level dataset

I. Evolution of articles with APC and France-based corresponding authors

I. Evolution of subscription expenditures